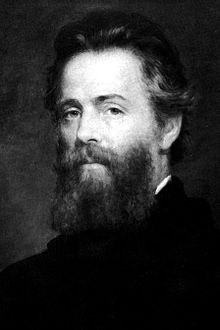 Herman Melville (1819-1891) came to Liverpool at two very different points in his life. In 1839, he arrived at the city as a young man, having undertaken his first voyage as a merchant sailor on board the St Lawrence, and remained for a month before his ship returned to New York. He did not return again until 1856. On this second visit, the older, renowned author Melville used Liverpool as the starting and ending point for a trip to Europe and the Middle East. During this trip, he also visited his friend and fellow American author Nathaniel Hawthorne, then serving as US consul in Liverpool.

Melville used his 1839 visit to Liverpool as the basis for his fourth novel: Redburn, or His First Voyage, published in 1849. Redburn  was a substantially fictionalized version of Melville’s own first voyage and it tells the story of a naïve teenager, Wellingborough Redburn, who takes work on board the Highlander, a merchant ship bound for Liverpool. Redburn suffers trials and hardships on board due to his inexperience, giving Melville’s book both a comic and a tragic tone. The novel has a long central section set in Liverpool, in which Redburn marvels at the city’s maritime prowess, but despairs of the poverty of some of its inhabitants. To document Melville’s connections with Liverpool, we have created a digital map that details the locations Melville used in Redburn as well as the places that Melville visited on his 1856 trip. Unfortunately, Melville did not keep a journal of his visit in 1839, so we have no way of knowing exactly which locations in Liverpool he visited on his first voyage.

Mapping Melville’s Liverpool comes with challenges; one of the biggest being the way in which the city has changed since the mid-nineteenth century. Buildings and streets that Melville describes no longer exist, making it impossible to map the city that Melville knew onto the modern landscape with complete accuracy. But encountering the differences between representations of the city and its modern realities mirrors the experience of young Redburn in Liverpool. In the novel, Redburn arrives in Liverpool with a copy of his late father’s guidebook to the city, obtained when his father visited Liverpool as a wealthy merchant. (Melville’s own father, Allan, had made a similar trip, and Redburn’s guidebook is based on a real guidebook – The Picture of Liverpool (1808) that may have belonged to Allan.) 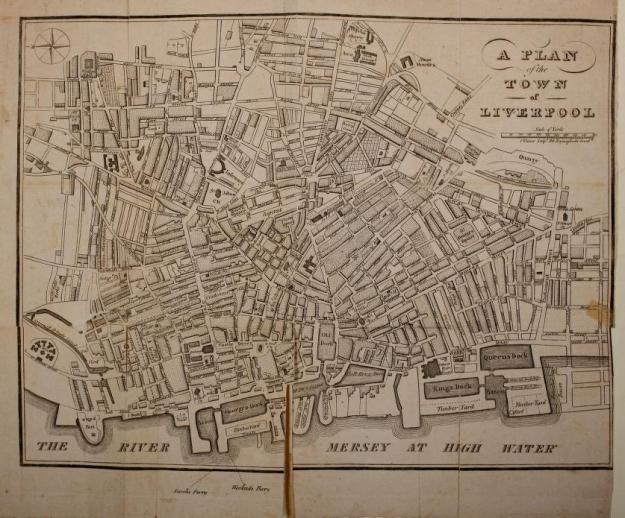 However, Redburn soon finds that his guidebook is twenty years out of date and is, therefore, useless:

And, Wellingborough, as your father’s guidebook is no guide for you, neither would yours (could you afford to buy a modern one to-day) be a true guide to those who come after you. Guide-books, Wellingborough, are the least reliable books in all literature; and nearly all literature, in one sense, is made up of guide-books. Old ones tell us the ways our fathers went, through the thoroughfares and courts of old; but how few of those former places can their posterity trace, amid avenues of modem erections; to how few is the old guide-book now a clew! Every age makes its own guidebooks, and the old ones are used for waste paper.

We can draw connections between Redburn’s guidebook and our own guide to Melville’s Liverpool, an early version of which is pictured below (click on the image to download the interactive map–requires the Google Earth app.). Although our map may not fully capture the Liverpool of Melville’s day, it does show how landscapes have changed over time, which is exactly what Redburn becomes aware of during his visit to Liverpool. 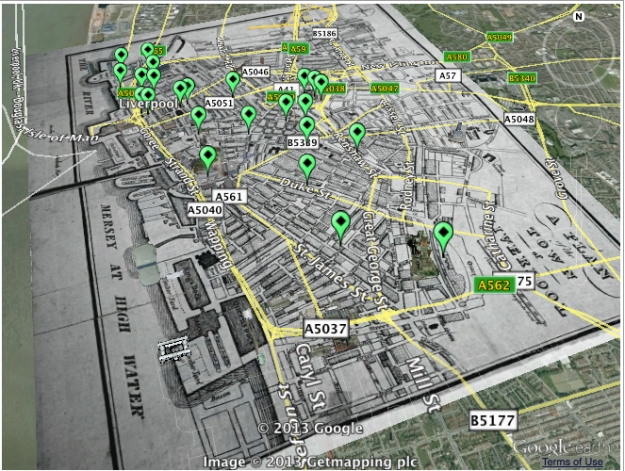 Screen grab of Liverpool Atlas version 1, based on Google Earth. Click on the image to download the interactive map.

The Liverpool Atlas aims to plot onto modern Liverpool the locations described in Redburn and in Melville’s journal of his 1856 trip and to create an interactive resource for researchers, students, and visitors. An early version of the map map can be viewed on this webpage, or downloaded and viewed through Google Earth on your computer or smartphone: download the map by clicking here. Click on the placemarks to see pictures of the locations in the past and the present day, and find out further information about nineteenth-century Liverpool and Melville’s depiction of the city. The map also includes an overlay of the plan of Liverpool from the The Picture of Liverpool, so you can see how the city has changed over the past two centuries (in the downloaded version, you can turn this on and off).

This project is still in development, and we hope to add to it in the future by mapping depictions in Liverpool in other fictional works, and other depictions of Liverpool’s maritime and whaling history. If you have any suggestions or comments on the map, please get in touch with Katie at the e-mail address below.